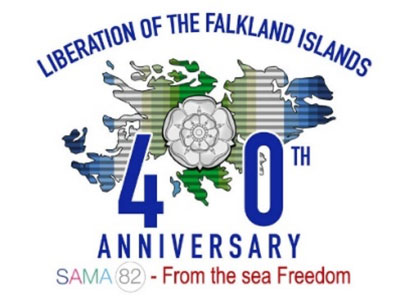 Falklands40 is the official publication of the South Atlantic Medal Association (SAMA82) – the Falklands Veterans’ association – and will be launched in June 2022 to mark the 40th Anniversary of the Falklands Conflict.

A salute to bravery and courage, Falklands40 will pay tribute to the many members of the British Armed Forces, as well as their civilian colleagues, particularly in the merchant marine, who together planned and executed the liberation of the Falkland Islands – whilst also serving as a legacy narrative of abiding remembrance for 255 souls who never made it home.

Introduced by leading members of the UK Government, the Government of the Falkland Islands and British Armed Forces’ leaders, the publication will feature a comprehensive timeline of events from Argentinian invasion to British liberation of the Islands.

Drawing heavily on eye-witness accounts of Veterans, Falklands40 will tell the story of the conflict from the unlawful surprise Argentinian occupation in April 1982 and the astounding five-day assembly of the British Task Force to the latter’s determined push south into hostile South Atlantic waters, the remarkable campaigns at sea, in the air and ultimately on the Islands themselves – which together brought victory and freedom.

Produced on behalf of SAMA by TheVeteran.UK Publishing Platform, Falklands40 will be published to coincide with major official commemorative events in 2022 – coincidentally SAMA’s 25th Anniversary year – including on board HMS Queen Elizabeth in Portsmouth and at the National Memorial Arboretum, and will be a significant source of funding for SAMA’s charitable work.

The over-arching role of the Falkands40 publication and its complementary podcast programme in providing a comprehensive narrative of remarkable bravery, sacrifice and achievement by British Armed Forces in liberating the Falklands Islands in June 1982 – and examining the long-term legacy for both the liberated and the liberators – and their families, including those of the 255 military personnel who never made it home.

1. Timeline of events from invasion to liberation

4. First contacts with the enemy and liberation of South Georgia

1. The legacy of liberation for the Falkland Islanders – forty years of freedom and peace, and the right to determine their own future, combined with greatly enhanced economic and strategic interest in the Falklands building on the reassertion of the Islands’ freedom and security.

2. The legacy of the Conflict for Veterans, their families and the families of the Fallen…..a complicated mix of pride in a job brilliantly done, with clear and sustained fundamental benefits for the Falkland Islanders, combined with the abiding pain of grief and loss and lives changed forever by enduring physical and mental injuries.

3. In what ways and how well have Falklands’ Veterans and their families been cared for over the years and by whom? How have needs and care changed over the last four decades?

4. How much did the Armed Forces learn from the Falklands Conflict in terms of handling battlefield casualties – medically and logistically – and confronting the impact of mental stress and trauma, both short and long-term?